The Patronising Gaze of the Camera: The Problems with Constructing Visual Identity of Kashmiri Women Around Their Tears — by Sadaf Wani

Previously translated into Bangla and published in Bama Patrika, a Bangla magazine on gender, Sadaf Wani’s piece explores the problems with creating and reproducing visual portrayals of Kashmiri women around their tears and moments of emotional vulnerability. Focusing on the practices of using photographs of grieving Kashmiri women to accessorize articles and events based around Kashmir, the piece discusses the insidiousness of such acts and how centering the visual identity of Kashmiri women only around certain kinds of visual portrayals contributes to the erasure of complex struggles and contributions of Kashmiri women.

This piece includes screenshots (provided by its author) from various sources, displayed here under "fair use" for illustrative purposes, with direct a citation for each source.

The keywords ‘Kashmiri women’ fetch two very different and almost contradictory sets of images on the internet as representations of who Kashmiri women are. One set of images focuses on visualising Kashmiri women as these young and fair women, who dress brightly in traditional clothes and are always readily and naively smiling into the camera. The other set of depictions come with grim overtones and consist of visibly distressed, pale middle-aged women in a state of mourning. The distress and grief in these photos are consequences of and reactions to the violent escalations in the valley. The first set of images collate the perceptions that ‘outsiders’ (travellers, colonisers, rulers, tourists, photographers, scholars) have had of Kashmiri women and respond to this gaze by recreating the caricature of the indigenous Kashmiri woman. While the second set of images have become popular amongst photojournalists and conflict photographers, especially in the last two decades. These photographs develop various afterlives on the internet when they become supporting visuals for different types of written and audio-visual content on Kashmir in the form of feature photographs, cover photos, thumbnails, poster images etc.

While the problems with the first set of visuals have been discussed and reflected upon in the Kashmiri public sphere, the insidiousness of the second set do not get talked about often. This is also because in the face of strict surveillance, these images of intense grief and pain help counter the state’s narratives of normalcy about Kashmir. As these photographs play an important role in circumventing restrictions on documenting stories of human suffering in Kashmir, the pertinent question to ask is not why are there pictures of grieving Kashmiri women on the internet, but why are these visuals the most dominant visuals of Kashmiri women available in the public sphere? Have tears been the only contribution and reaction that Kashmiri women have had to their turbulent political history and present? And if not, then why do the visual materials around Kashmiri women have this compulsive need to focus on this one form of emotional display?

The liberty with which visuals of mourning Kashmiri women are paired with any and every news piece on Kashmir is both enraging and concerning. Images 2, 3, 4, 5 and 6 are screenshots of articles written around different aspects of the Kashmir conflict like the effect of the pandemic on Kashmiri women (image 2), how the trauma of conflict impacts reproductive health of Kashmiri women (image 3), proactive role of women in Kashmir’s resistance movement (image 4), women of conflict as an intersectional category (image 5), and image 6 is a visual attached with a webinar on Kashmir. It is strikingly odd that these articles (along with many such articles on the internet) should resort to using photographs of grieving Kashmiri women as supporting media, even when they aren’t directly relevant to the written content.  The prevalence of this practice makes it important to question the use of these images and ask why these visuals are so frequently as representational visuals for Kashmir and Kashmiri women.

If one were to trace the role of women in Kashmir’s conflict based on such visual resources, a highly un-nuanced picture of Kashmiri women as passive victims of the conflict emerges. In the visual repository, Kashmiri women’s presence is marked by their overt display of grief. The women in photographs are almost always captured bawling and wailing, usually next to a dead body (of a relative, a militant, a protestor, a civilian). They are almost always reacting to a moment of intense grief and pain. Since the past couple of decades, funeral processions have become popular spaces for capturing the ‘rawness of conflict’ through the face of the Kashmiri woman. While there is nothing inherently wrong with portrayal of grief on camera (provided the person has consented to it), in the context of Kashmir’s limited visual history, it becomes important to revaluate the value of repeating only certain kinds of photographs of Kashmiri women. Because while it is true that Kashmiri women cry and tears are not antithetical to resistance; they also rage, work, run, protest, raise kids, fight the objectifying gaze and hands of armed and unarmed men in bazaars, streets, and public transport. They resist occupation, militarisation, patriarchy, sexual harassment, poverty, domestic abuse, casteism, inequity, unemployment every day and in many ways. Then why is the camera only obsessed with the tears of Kashmiri women? And why are only one kind of tears visible to the camera? 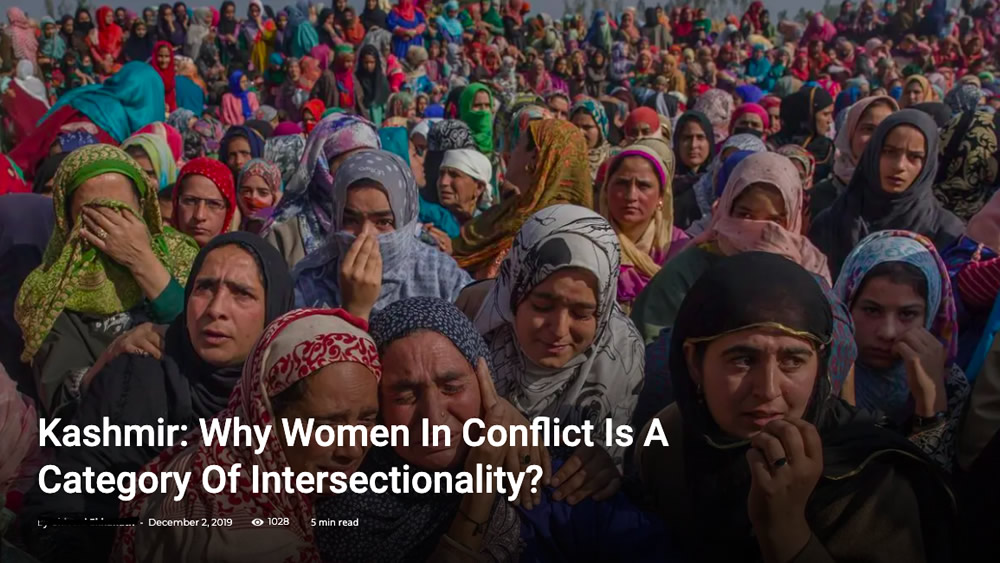 The portrayals of Kashmiri women in emotionally vulnerable states are created, preserved, and reproduced with an alarming frequency.  It is alarming because it reveals that for those in charge of knowledge and content production on Kashmir, Kashmiri women are primarily grieving bodies in conflict, and their labour (physical, political, emotional) and the roles that they play in socio-political and cultural sphere are secondary and thus not important enough for the camera. This non-recognition of the roles they play in the society actively inhibits the reporters and observers from acknowledging the intersectionality of struggles of Kashmiri women. Conflict doesn’t affect Kashmiri women only through death and sexual violence, although these tend to be the only cases where their grievances about conflict are considered acceptable. This patronising attitude towards Kashmiri women that visibilizes them only in moments of intense pain and grief contributes to the erasure of the complex realities of Kashmiri women and their struggles. This one-dimensional visual portrayal risks undermining the variety of critical roles that women have played in Kashmir’s political history and resistance movements as participants, protestors, intellectuals, caregivers, workers and more.

Manufacturing Solidarity Not Sympathy Through Visuality

Politically, Sympathy is a passive emotion. It perpetuates the existing power dynamics and the affective responses it invokes are limited. The functions of sympathy with respect to political conflict tend to be limited in how people are gratified by their own greatness in acknowledging the pain of others and it hardly moves beyond that. John Berger’s comments on the contradictions of war photographs are relevant in understanding how the arresting power of photographs can have limited functionality in terms of generating long term political engagement and solidarities. He says that “the reader who has been arrested by the photograph may tend to feel this discontinuity as his own personal moral inadequacy. And as soon as this happens even his sense of shock is dispersed: his own moral inadequacy may now shock him as much as the crimes being committed in the war. Either he shrugs off this sense of inadequacy as being only too familiar, or he thinks of performing a kind of penance….”.

There is a need to manufacture sustainable solidarities for Kashmiri women, and not merely sentiments of sympathy which dissipate before they translate into concrete actions. Solidarities come with the acknowledgment of past struggles and allyships which offer support in principle and action. The male photographer’s project of manufacturing sympathy through photography is informed by gender politics, class difference, and internalisation of the ‘outsider’s gaze’. The ‘outsider gaze’ for which the Kashmiri women only become visible in their extreme beauty or extreme pain, is being internalised by scores of young photographers mostly men, who grow up in professional spaces which lack representation and voices of Kashmiri women and thus feel the need to portray women as how they see them instead of how they are. Works of young and brilliant women photographers like Masrat Zehra (Image 7), Sanna Irshad Matto amongst others make a solid case to show why representation matters in mass media. The women that are captured by these women photographers are also women of conflict, but there is a nuance and complexity to their life. There is a visible attempt to go beyond the shock value of crippling grief and engage with the Kashmiri women in their fullness, dignity, and complexity. When photographers decide to undertake the task of representing a community, they also need to take the moral and ethical responsibility of that representation. The local and non-local photographers capturing Kashmiri women need to be held accountable for the representations they create and propagate, and this accountability extends to the various afterlives of these photographs.

Ekkanath, S. (2019, December 2). Kashmir: Why women in conflict is a category of intersectionality? Feminism In India. https://feminisminindia.com/2019/12/02/kashmir-women-conflict-category-intersectionality/

Ganai, N. A. (2018, August 7). No woman loses property right in J&K if she marries a non-state subject. Outlook Magazine. https://www.outlookindia.com/blog/story/no-woman-loses-property-right-in-jk-if-she-marries-a-non-state-subject/3937

Sadaf Wani
Sadaf Wani is a Kashmiri writer and researcher. Her work has been published in Himal South Asian, Scroll, Wande Magazine and Sahapedia among others. Her research interests lie at the intersection of urban sociology, gender and visual cultures.