Decolonizing Space: What The White Lotus and The Chair Get Wrong about Student Politics — by Shayoni Mitra
September 9, 2021 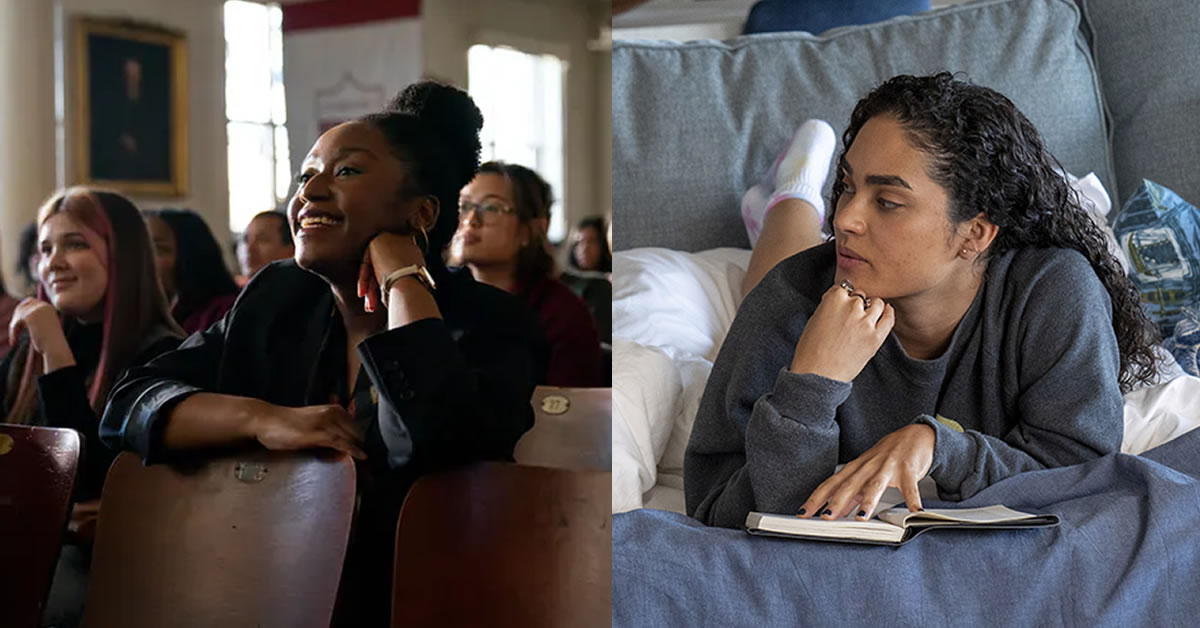 In this piece, Shayoni Mitra, who teaches at Barnard College, Columbia University, provides a direly needed critique on two highly-watched and trending shows, The White Lotus (Netflix) and The Chair (HBO). While discussing what succeeds and stands out in both series, Dr. Mitra problematizes common fissures that reveal what is deeply absent from the plotlines, characterizations, and thematic undercurrents that respectively shape both of these popular series.

In the closing episode of The Chair, Professor Ji-Yoon Kim swivels to her dean and says, “Will it change anything?” It’s a lofty question, a consideration strong enough to end her walking the line between faculty, administration, and romance, to declare her partiality toward colleague and love interest Professor Dobson, and render his disciplinary hearing improper. She says this over the muted chants of students outside demanding the dismissal of Dobson. He still has to go, but later we learn he has rejected a settlement and is going to challenge the university’s decision, at great personal cost. Kim herself fails a close no-confidence vote in her leadership at a department meeting, but in a final administrative jujitsu as chair, ensures that her successor is Joan Hambling, the department’s long overlooked third most long-standing professor, who recounts performing a sexual favor to the then college president in a car on receiving tenure. Her office was unceremoniously moved to the basement of the sports recreation building in the first episode, a dank peeling room with no Wi-Fi where she memorably in one scene starts a trash fire with unread and presumably unkind student evaluations.

In an excellent gripping series rightly lauded for getting the minutiae of academia right, leading at least one fan to marvel at Sandra Oh uttering digital humanities on a major television show, the muting of student voices is curious but sustained. This would not be a problem for a show premised on the workings of the faculty and administration of an English department at a minor Ivy university, if it were not for the fact that each institutional crisis of the show is precipitated by student activism—a student memes Dobson giving the Nazi salute during a lecture on absurdism as a reaction to the horrors of the dispensability of human life under fascism, Kim makes the front page of the campus newspaper for supposedly placing a gag-order on Dobson’s teaching assistant, black students preemptively coral support for Yazmin McKay, the department’s only junior black professor, whose tenure case might be in jeopardy, and even the evaluation-burning, disguise-donning staunch Chaucerian Hambling has to deal with the online misogyny and ignominy of professor rating internet platforms. In each case, the professors try to do good—Dobson holds a student town hall on the quad, Kim while teaching Audre Lorde seeks to deepen the context for masters tools dismantling the master’s house, Yale’s attempt at luring away McKay is stemmed by the endowment of a lecture by  wealthy, celebrity, wannabe intellectual David Duchovny in exchange for an honorary doctorate, and Hambling confronts her online detractor to deliver an impassioned defense of Chaucer and his feminist smut. But even she can’t help sounding like a jaded feminist has-been when she excoriates the Title IX officer for showing her fanny to the world.

The White Lotus, another hit series of the summer, is filmed far from the snow-and-ivy-covered halls of a small-town college campus, in lush Hawaii. Set as a murder mystery, viewers watch six episodes to learn who dies, and how. Two of the central characters are Olivia Mossbacher and Paula her friend whom she has brought along on her family vacation. Opening commentary from the two on the imagined lives of each of their co-passengers on a small boat ferrying them to their resort, establishes the tone for the series—rich white people, unaware of their privilege, going on holiday. The two bully Olivia’s younger brother out of a shared room, frequently challenge and cross boundaries with the Mossbacher parents, and shun the friendly overtures from other hotel guests. Their terrifying insular snobbery even causes Shane Patton, the show’s eventual killer and general all-round jerk, to remark on their poolside reading habits—Nietzsche and Freud one day, and Fanon and Paglia the next. He himself is reading pop guru Gladwell’s Blink, while his newly-wed wife undergoing an existential crisis over her paltry journalism career is earnestly reading Italian pseudonymous Ferrante’s My Brilliant Friend. The reading choices are so savvy that they have spawned several articles of their own, and led Pulitzer Prize winning New Yorker culture critic Emily Nussbaum to muse on a Twitter thread “What would you be reading at The White Lotus?” (my answer—what I am currently reading, Orwell’s Ode to Catalonia).

Here too contemporary politics, the student cultural zeitgeist, precipitate the central crisis in this colonized Eden. Shane keeps a pineapple-cutting knife by his bedside with which he finally, fatally stabs Armound the general manager, because he hears of a jewelry heist in the Mossbacher room, one pulled off by Kai, a Hawaiian native and hotel employee, abetted by Paula giving him the safe code. Kai assaulted Nicole and Mark Mossbacher while trying to make his escape, and Mark shows off his shiner to Shane. The reason for this Lady Macbethian turn? Paula frays and frets through six episodes at the casual racism of the Mossbacher family, their defenses of their own privileged whiteness, and the commodified display of indigenous Hawaiian performativity at the cost of erasure of their political, ecological and economic identity. Even the show’s brilliant wannabe benign benefactor Tanya McQuoid delivers one of the most memorable gags of the season, mistaking her potential date’s involvement in BLM for Black Lives Matter, rather than the Bureau of Land Management as he meant to signify. Hilarious from the character who strings along the show’s only black character with promises of financing her dream spa business, only to back out and hand her an abject envelope stuffed with cash instead.

Discussions of decolonization tie these two shows together—of institutions, departments, and curricula on the one hand, and of land and an indigenous population on the other. The Chair beautifully wades into the thorniness of identity politics and the culture debates with substantial spoken Korean (and the intergenerational differences in language affinity amongst ethnic diaspora), international adoption and enculturating the adopted child in their cultures of birth and adoption, and even the first birthday ceremony of a Korean child replete with Asian grandmothers seemingly only concerned with marriages and money. The White Lotus emphasizes the dispensability of its staff of color through dropping them from the story line once they leave the plush resort. Paula herself has neither last name nor any family details in this world where we don’t know exactly where anyone lives or the places they call home.

Despite these lofty flourishes, the central whiteness of these shows remains unshaken. Both have white writers (Mike White for The White Lotus, and Amanda Peet, Annie Wyman, Richard Robbins, and Andrea Troyer for The Chair). By raising the bogeyman of campus culture and caricaturizing student politics, large political movements are condensed to serving the with-it-ness of the central characters. They have their activist bonafides—Dobson sat his bare ass on the dean’s table for South African divestment in his student days, Nicole has smashed many a glass ceiling in the tech world. But their actions, and the overall arc of these series, cast them as rites of passage. No radical transformation happens. Except perhaps for Quinn, who disconnects from his world of electronic entanglements to run off and be part of an inter-island canoeing team, an escape creator Mike White has been on record saying is the closest he could wish for as a white man navigating today’s world.

The scepter of student politics then is a ruse. We never learn what happens to the petition to save the Ethnic Studies department at Pembroke. The major texts we see taught are still Chaucer, Beckett, Melville and Dickinson. The impressive McKay with her innovative pedagogy is tackling the white whale. Theory is dismissed as poolside shenanigans in The White Lotus. Any serious discussion of Hawaiian reparations is forestalled by the dénouement of Kai’s theft. In asking for Colson Whitehead, we get David Duchovny. It is no surprise that the central poetic references for these shows are Tennyson and Elliot.

As a middle-aged academic watching, these shows had me asking what do they want of me? I cannot speak for the students they anonymize, minimize or caricaturize. There are shows which deal more directly with student and young adult protagonists and their political lives like Dear White People or I May Destroy You. Instead, I came away from The Chair and The White Lotus feeling like student politics was something to fear, manage, deride or be smugly snarky about, the kind of chitchat one might make at dinner parties or luaus. The seduction of these shows is that they marshall the issues of the day exemplarily. You feel cool for watching. You may even have to look up some of what the youths are saying (as I had to with sea hags)!

But they give us no way to actually engage with the very real problems and the large political movements that ground them. Even Dobson’s daughter, departing for Columbia as a Freshperson, who exhorts her father to get his act together is nothing but a few fleeting texts. The only undergraduate who springs to Dobson’s defense is a red-hat wearing tall young man who shouts at him not to back down from the free speech battle. The merging Title IX and Ethics administrator recites the well documented impediments to women advancing in academic. We know who the free speech on campus serves most, but mainstream television wants us to think it is really us, the well read, well heeled, exceedingly well-meaning people of privilege that might fall prey to its most zealous young lefty propagators.

Hua Hsu, demonstrating the powers of his own argument in his review for the New Yorker, suggests it is empathy that undoes Kim’s best intentions. She is worn down by her advocacy for colleagues and students. Certainly, anyone in or managing an academic department can relate. But to broach long-term change as a tease only further entrenches the view that student politics is but passing fancy. Anyone being candid about the state of American higher education will say that the real problems are the open embrace of neoliberalism by academic institutions, the skyrocketing tuition, the casualization of academic labor, the undermining of teaching as a skill. Or else we will be left with the world of The White Lotus, where education is an elite sport. It is no surprise that in teak-lined offices of The Chair there are no adjuncts in the department. That’s when you know it’s not based in reality. It is the same tired tactic of pitting faculty/adults versus students rather than confronting the work that would make way for structural change. I am more interested in the world where the doors and windows to our offices stay open, where, uninterrupted, we can hear our students. And really listen.

Shayoni Mitra is a Senior Lecturer at the Department of Theatre, Barnard College. Columbia University. She teaches courses on performance theory, feminist politics and Asian theatre styles. Her writings appear in academic journals such as amongst other Contemporary Theatre Review, The Drama Review, Asian Theatre Journal, Economic and Political Weekly, and in news publications such as the Indian Express. She has been a Transnational Feminisms fellow at the Barnard Center for Research on Women, and is on the executive board of American Society of Theatre Research. She lives in New York with her two daughters and exuberant rescue dog whose training is a work in progress.