Mir Yasir Mukhtar returns with an important photo essay detailing the struggle of a historic barbershop—the New Rose Beauty Salon—to stay afloat in Srinagar’s Tange-adda heritage market located in Dalgate. Established in 1953, the salon is run by two brothers, who inherited it from their father and have since strived to keep it functioning after four decades of operation—having already survived August 5 while barely making it across the still ongoing pandemic.

In Srinagar’s Dalgate, a heritage market known as the Tange-adda, or Tonga Station reminds passers-by of an iconic image of the place that is reminiscent of Kashmir’s 1990’s era. In earlier times—before August 5th 2019 and before the pandemic lockdown—the market would usually remain crowded with groups of locals and a barrage of tourists who travelled from far to visit the highly popular Dal (lake)—which is situated only a few miles away from the market.

The name Tange-adda remains permanent in local nomenclature because till the early 90’s it used to be a hub for horse carriages that tourists would hire to enjoy lakeside rides. In 1945, an American serviceman by the name of Robert Keagle—who served in Calcutta and Burma during World War II—photographed the market. With the advent of the internet and the growing digital archives it has brought about, Keagle’s 1945 photograph—preserved in University of Chicago’s archives—remains an iconic image found in Google searches that relates that era to the current one—with the link between the two time periods being a small barbershop at the base of a historic Srinagar house.

In this once relatively busy market, the house assembled in Maharaja-era architecture remains vacant since its owner’s death. The structure is a firm reminder of the old style of architecture resisting against its own rapid disappearance throughout a Kashmir where new modes of construction have rapidly emerged with their own unchecked nouveau aesthetic. At the base of this historic house, on the ground level, Hakim Hafeez Ullah owns a barbershop—a salon that he has been running for over four decades with his brother Ghulam Ahmad.

On a regular basis, Hafeez, age 55, opens the shutter of his salon every morning. As he slides the wooden door open, the left side of the window panel is painted with the name of his shop, New Rose Beauty Salon—a place of business passed down to him by his father. The salon dates back to 1953, when Abdul Ahad Hajam, Hafeez’s father established the venue. As Hafeez sits idle on a chair, he comments, “Before us, my late father was the sole owner of this shop, and after his death, we took over. It remains a gift—a legacy of our father—to us.”

The shop from inside appears old and with an air of antique to it, that gives the impression that it is older than the two brothers—Hafeez and Ghulam Ahmad Hajam—who run it. They say that they have been working as barbers since their childhood and that they continued with this vocation to keep the legacy of their father alive. The shop remains a piece of art, untouched and unfinished, like a relic that is also a work in progress against the tides of time and its passing. The duo has re-constructed and re-shaped the shop slightly to adapt to a more modern style of salons, but the equipment’s remain the same, and so do the thoughts and feelings of nostalgia that it evokes. 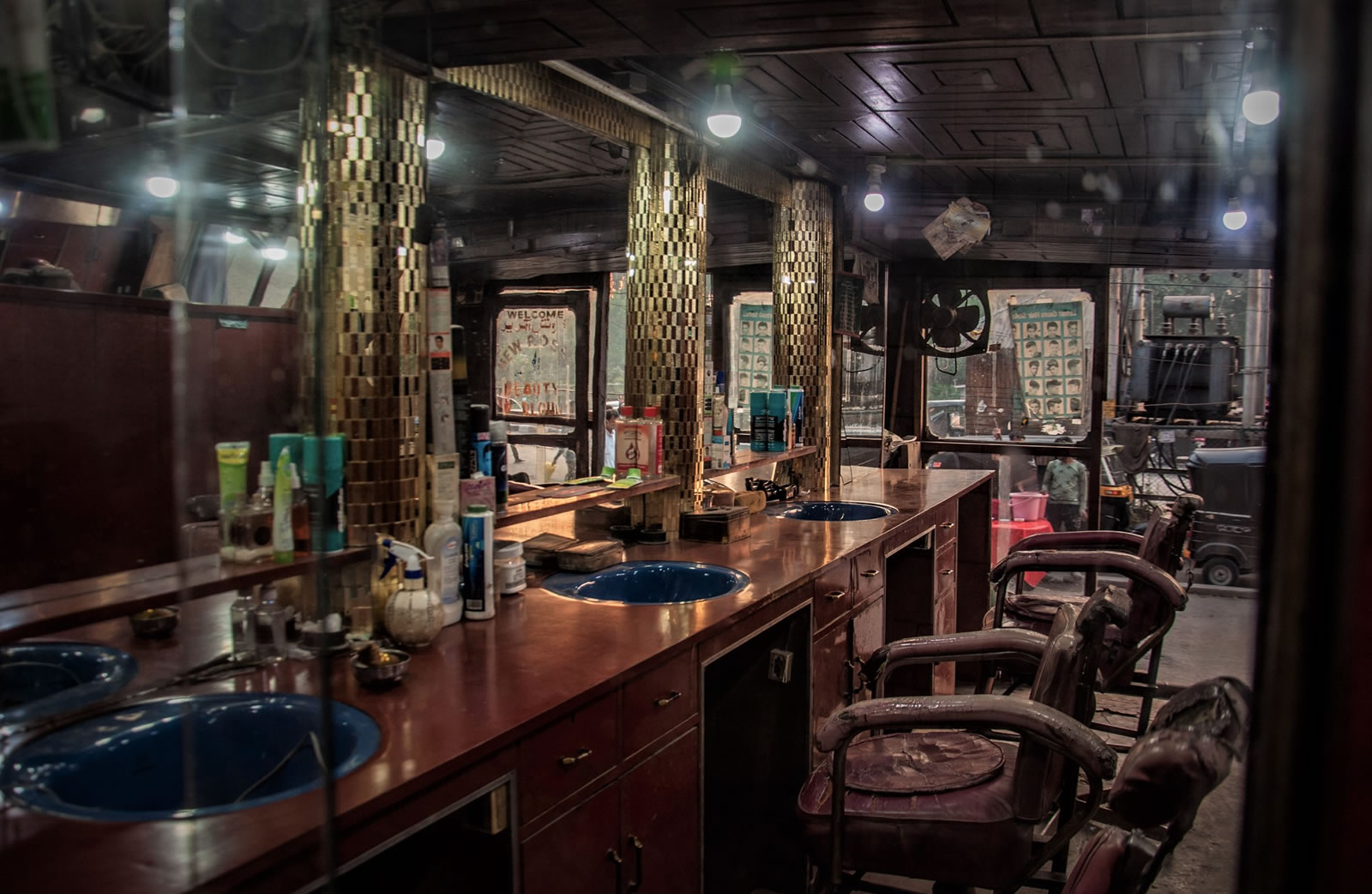 A view inside Hafeez’s salon that has been running since 1953 in Tange-adda market in Dalgate, Srinagar, Kashmir. (Photo by Mir Yasir Mukhtar/Inverse Journal)

From the entrance, the wooden chairs to the products, everything has a worn-out aura of permanence sculpted through time. The barber chairs are old-fashioned and usually emit creaking sounds when they are being moved or when a customer sits on them. A photo frame of young Hafeez is placed on the wall. The salon equipment and accessories like hair-dyes, talcum powders, shaving blades, shaving brushes are all products of a certain era that have been replaced in the market with the newer ones. The furniture of the salon is upholstered with sleeves and covers that have been torn through time.  Islamic hoardings and calendars hide the cracks on the walls, while an old television lies in an almirah on which Hafeez’s father used to watch the cricket matches played between India and Pakistan.

Ghulam Ahmad, Hafeez’s brother, rests against an almirah that stores an old television from his father’s time, kept for remembrance in their barbershop. (Photo by Mir Yasir Mukhtar/Inverse Journal)

Just as Hafeez, his 57-year-old brother Ghulam Ahmad, who also spent his life in the same shop, has much to share. He carries a grim face and recalls the more vibrant days of his past and says, “The shop looks old, but it is precious to us. As kids, we used to be here all day long just to get a look at western tourists who were customers to my father, and sometimes we also used to help our father with secondary tasks. After his death, we didn’t abandon the shop and instead kept it going so that we could keep his legacy going. He died in 1979.” 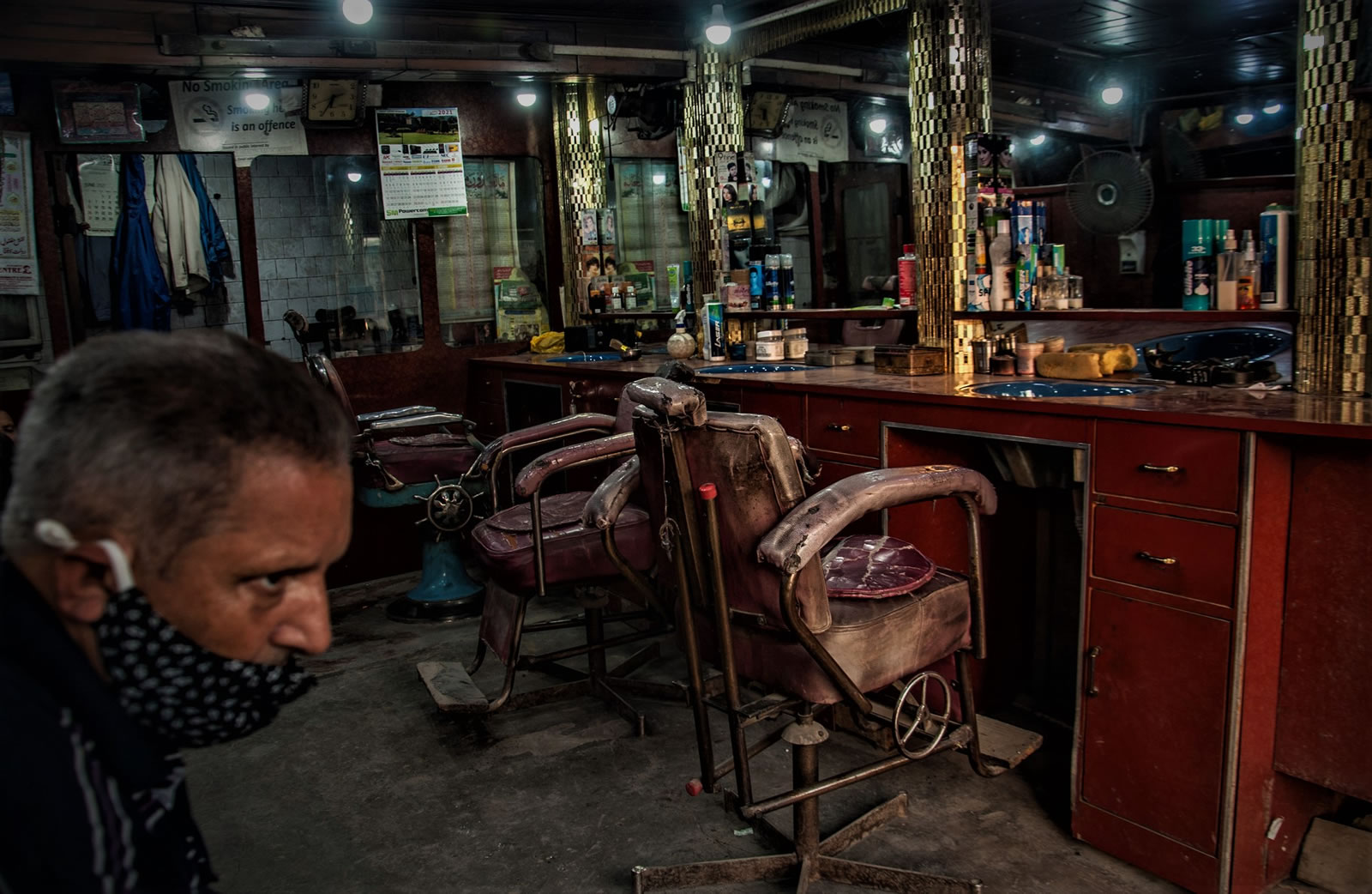 Hafeez’s father was also a well-known practitioner recognised in the community for healing skin ailments, particularly boils, or phaephir, as they are called in Kashmiri. He himself would make band aids—mahlam pait in Kashmiri—which were part of an old method for healing such skin ailments. The duo inherited the skills and knowhow of running a barbershop from their father, and even after his passing continued to treat skin ailments for years. But with the growing fields of dermatology and advances in medical science, they abandoned this part of their practice.

In return, Hafeez continued with the expertise he had been trained for since his childhood, proudly claiming the virtues of returning to his craft: “to be a barber than to work as a hakeem.” As more advanced tools appeared for hair stylists to use, another specialisation died in time—the age-old use of the folding barber blade, the khur or ustara as it is called in Kashmiri. Hafeez says, “People hesitate to be shaved with an ustara because you can’t replace its blade with each new shave and they think it is more likely to transmit diseases.”

Hafeez shows the old traditional shaving blade, called khur in Kashmiri, no longer used by barbers. He has kept it as a memento from the earlier days of his barbershop. (Photo by Mir Yasir Mukhtar/Inverse Journal)

Hafeez has spent four decades in his barbershop and the customers have been friendly, some even coming from the village side to meet him. In Kashmir, a few shops and family-owned businesses like salons, barbershops, bakeries, and tea shops have become hotspots for small congregations, working as newsrooms of sorts for elderly people to get updates on all sorts of topics and issues, and to debate political and social issues in the valley and around the world. For Hafeez and his visitors, the barbershop has always been a debate room—much like it is in all sorts of places where people gather to get a haircut or a shave, while momentarily unwinding and disconnecting from their everyday lives. 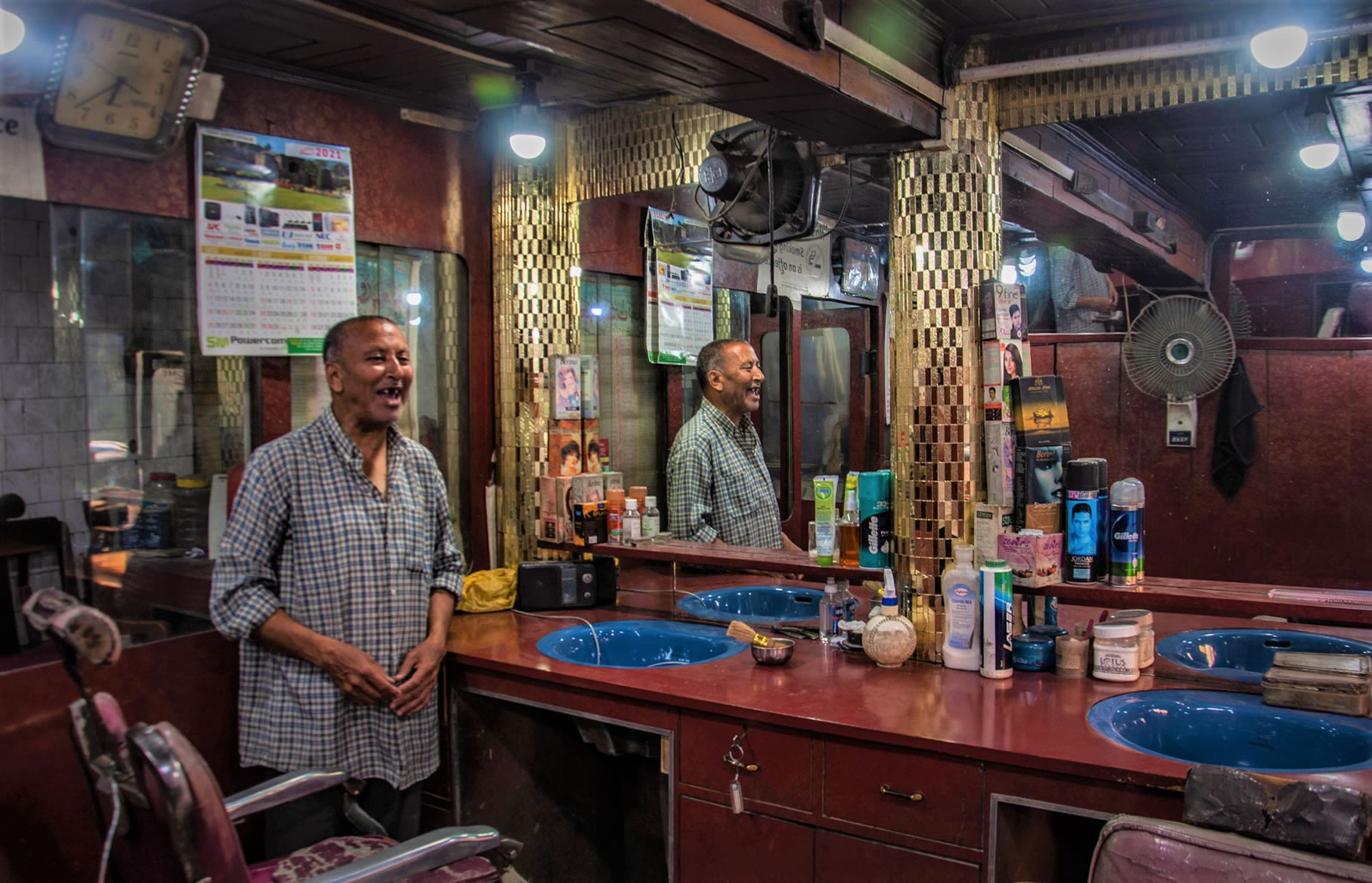 Hafeez laughs as his friend shares a memory from the song he had been listening to while waiting for customers to arrive at his barbershop. (Photo by Mir Yasir Mukhtar/Inverse Journal)

Most of the time, when he is not attending customers, Hafeez sits in his shop, puts on the radio and listens to some Urdu and Hindi ghazals sung by Mohammad Rafi and Kishore Kumar. He lies down on an indoor bench upholstered with cushions, getting lost in the melody as Zindagi ke safar main akeley thay hum echoes in the empty shop. In the middle of such a musical pause, an elderly man appears with a greeting.  He seems familiar as the two shake hands. After a few minutes, the atmosphere infused with the melody of Mohammad Rafi’s singing, slowly turns into the space for the usual political debate, which continues for long. 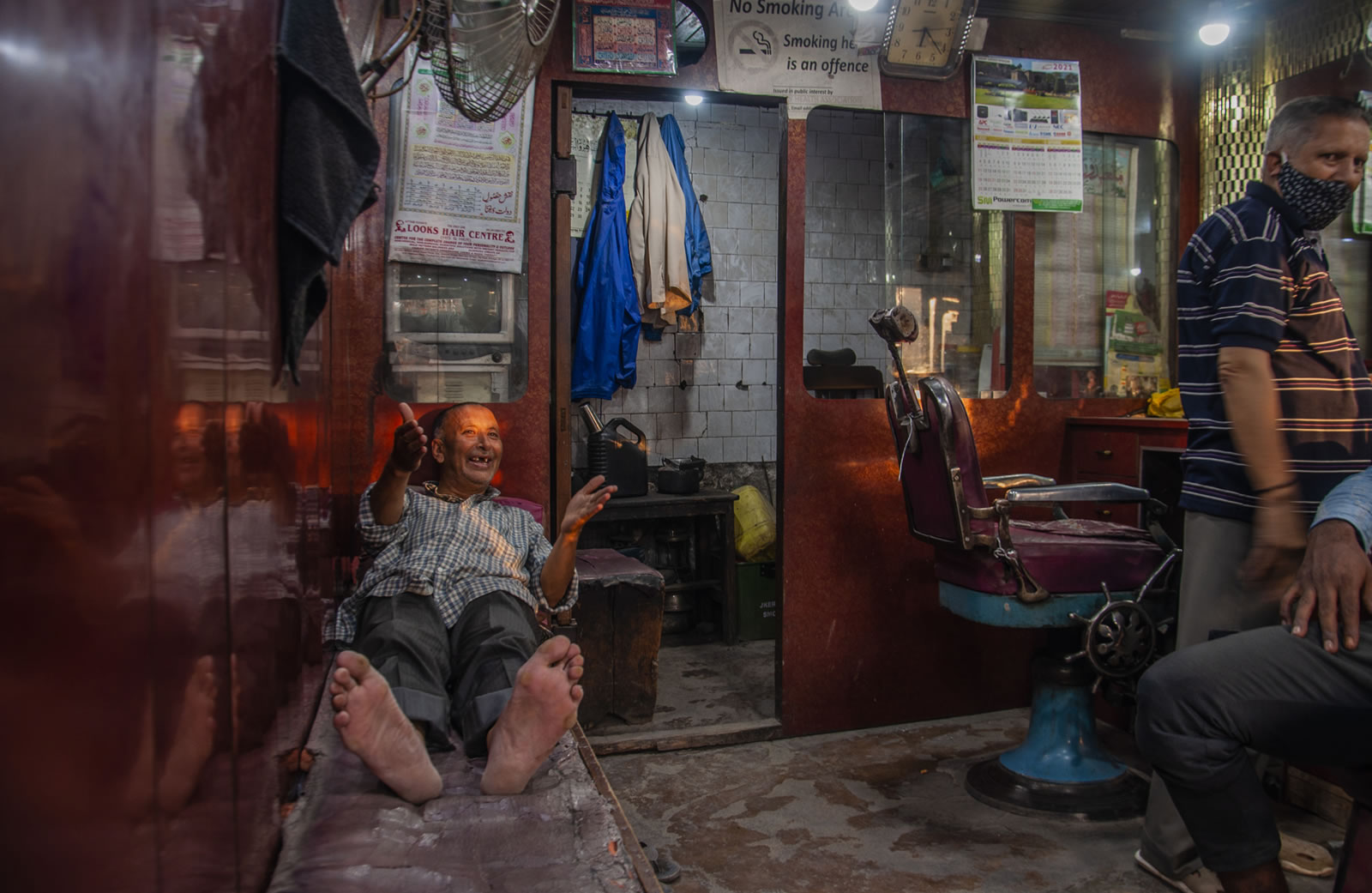 Hakim Hafeez Ullah (left) rests on a cushioned bench while discussing social changes that have affected Kashmir, engaged deeply in a conversation with his customer who has arrived at his barbershop in Dalgate (Srinagar, Kashmir), and is being attended to by his brother Ghulam Ahmad. (Photo by Mir Yasir Mukhtar/Inverse Journal)

Hafeez has a family with four daughters who are yet to be married. He feels worried about their futures as the work he has practiced for over four decades has suffered due to a significant decline in steady customers—and given the arrival of new and trendy salons appealing to younger generations in the valley. The new and lavish atmosphere of these salons has directly impacted the number of customers who will come to Hafeez’s barbershop—who, among others, caters to the old timers. Many youngsters prefer new salons rather than “old school” barbershops like New Rose Beauty Salon, forcing a number of Kashmiri barbers to either close or convert their shops into some other type of business. His visitor, the elderly Ghulam Ahmad unapologetically interjects and has his say on the matter: “Many Kashmiri barbers have been replaced by Indian ones who come here to work and end up setting up shops. Many of these Indian barbers learned the trade from us and now they rent our shops. So over the years, the Kashmiri barbers have lost their vocations and have nothing left to do.”

On an average day, Hafeez earns Rs. 300 to 500 and when there are no customers, he stays idle listening to old melodies on his radio. With Kashmir completing its second year of lockdown, many others like Hafeez whose income is generated from daily work have had to endure immense mental and financial distress. Hafeez is one among such victims of the perpetually declining conditions. He pauses, looks up at the ceiling of his barbershop, calculates the daily wage he spends to feed his family and says, “I have lost 90 percent of my earned income since Kashmir lost its autonomy after August 5 [2019], and the following Covid-19 pandemic lockdown has left me with even less customers. As they say the virus affects the elderly generation more harshly, so all of this has had a big impact on my financial situation.” 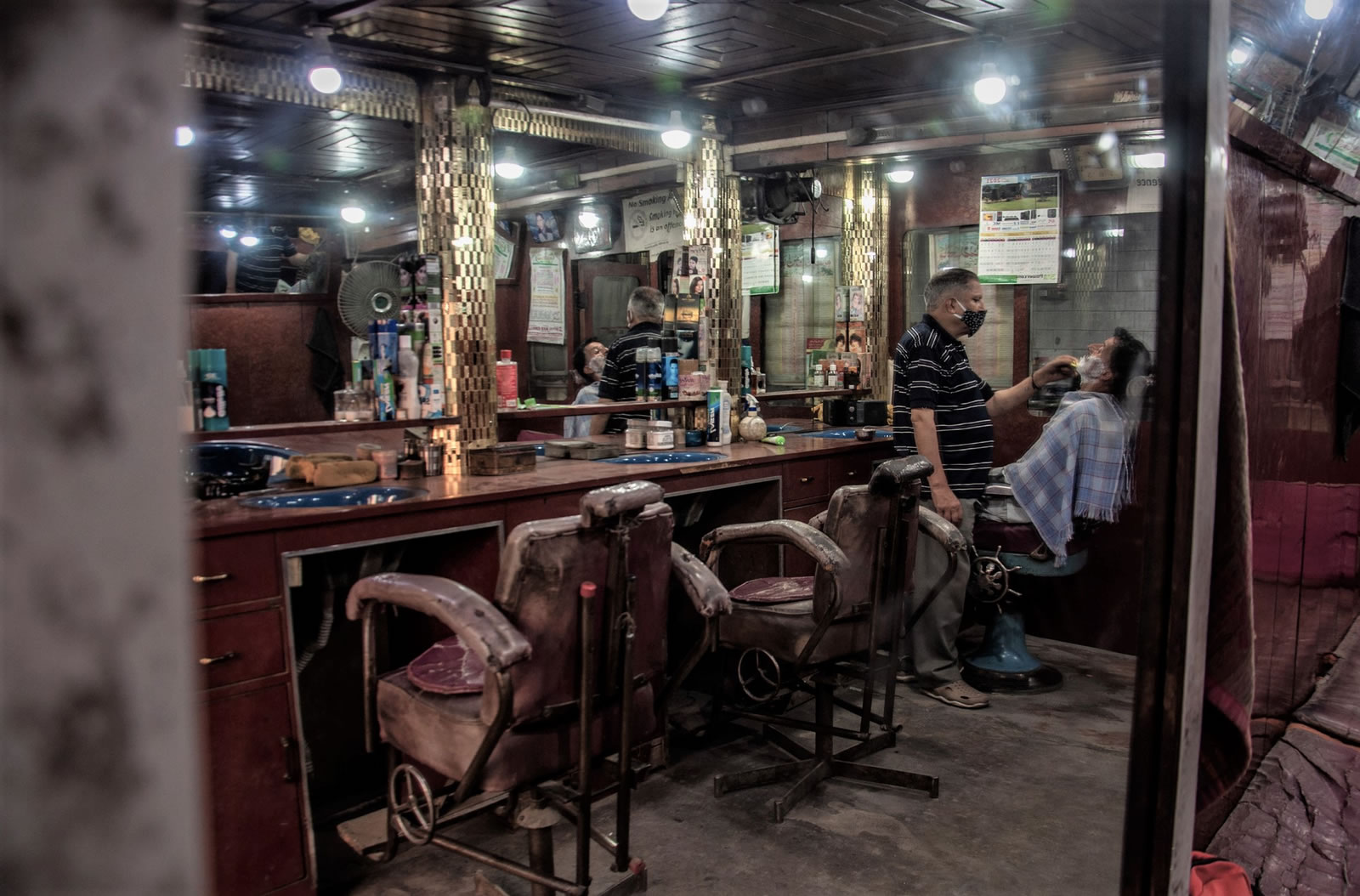 Ghulam Ahmad shaves the beard of a customer inside his barbershop. Photo by Mir Yasir Mukhtar/Inverse Journal)

Hafeez has been battling depression because of these financial crises, not being able to earn money through the ongoing pandemic. However, he remains hopeful and defiantly says, “As long as I’m alive, the legacy that was passed down to me by my father, and that has been part of me since childhood, will continue.”

With enough time passing by, the market has changed into something different and determined by fashion, trends, and circumstance. In that vortex of rapid change, Hafeez’s barbershop remains an iconic place of heritage in the greater scheme of things. This is in part due to two features that maintain their loyalty to Hafeez’s establishment: one, the traditional look and feel of a classic Kashmiri barbershop that carries decades of history, and second, the political discussions and the love for Kashmir reverberating within its four walls and that remains alive and ignited with each visit from customers and well-wishers—unfortunately fewer than many in these times of difficulty. 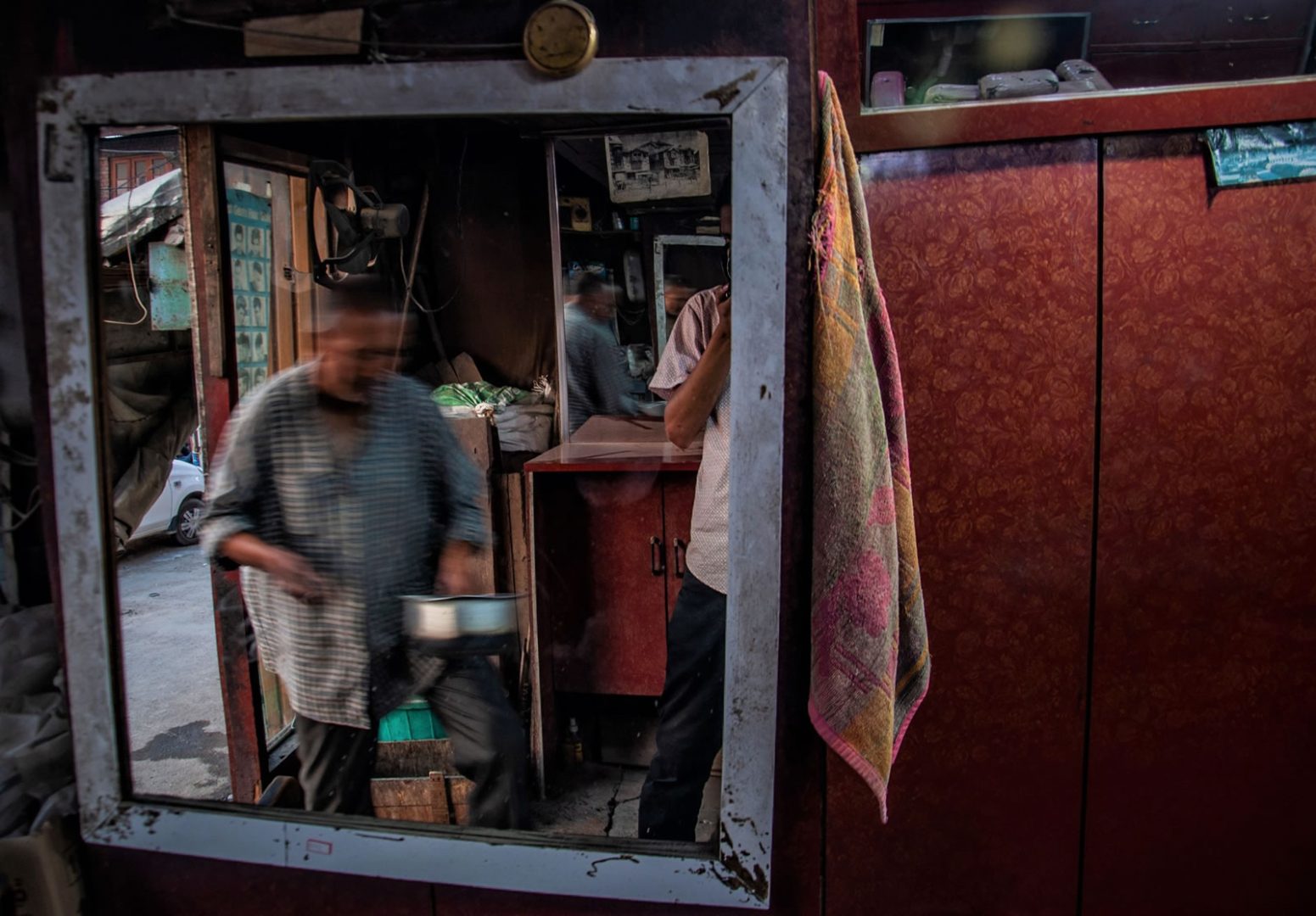 At the end of the day, Hafeez cleans utensils to make a cup of tea for his brother and himself inside their barbershop. (Photo by Mir Yasir Mukhtar/Inverse Journal) 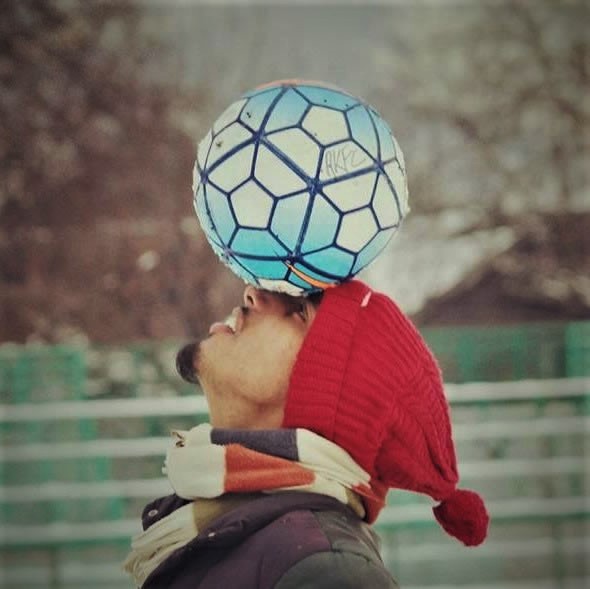 Mir Yasir Mukhtar
Mir Yasir Mukhtar is a freelance photojournalist based in Kashmir. He is developing his craft and skillset while looking to learn and further a career in the photographic industry. Yasir has captured day-to-day events in Kashmir, specializing in people’s movement, human portraits, nature landscapes and documentary features. Yasir has recently been published by Free Press Kashmir and other publications in Kashmir.