Dr. Javid Ahmad Ahanger reviews Khalid Bashir Ahmad’s “Kashmir: Looking Back in Time (Politics, Culture, History)” (Atlantic, 2021) situating the author’s work within a larger tradition of historiography. In the process, Dr. Ahanger evaluates Bashir’s book for the value it adds to Kashmiri scholarship during contemporary times while visiting some of the core topics and ideas that the text unveils or that had not been considered previously with the type of historical analysis it brings to fore.

For a long time, Jammu and Kashmir (J&K) has remained a favorite spot for scholarly exercise and academic inquiry. Intellectuals, writers, adventurers, and many a times recognised political figures have detailed Kashmir, its history and culture, politics and civilizational values, state oppression and feudal despotism in their writings. It is true that discussing J&K in the current environment of diametrically-opposed narratives and counter-narratives is a most challenging task for scholars and writers. It is here that Khalid Bashir Ahmad comes in and takes his chances with his recent book Kashmir: Looking Back in Time, in which the author has produced robust engagement with his topic while writing a fair and balanced story of the region. As the socio-political history of Kashmir has by and large remained in mounds of unexplored records and forgotten archives—which in turn has resulted in less documentation of contested region—Khalid has in recent years progressed as a main architect of documentation (still in progress) by writing a significant number of books on Kashmir. It is in this context that Khalid has now motivated many young scholars to work with more zeal to set the old chronicles and historiography on J&K straight with honest research and writing.

Khalid’s works constitute local writings on the history of the region and are principally based on the primary data available in the state archives of the J&K. He is an author, poet, and a former Kashmir Administrative Services (KAS) officer, who has served the State Administration as Director Information and Public Relations and Secretary, J&K Academy of Art, Culture and Languages, besides heading the departments of Libraries and Research, and Archives, Archaeology and Museums. His book Kashmir: Exposing the Myth behind the Narrative challenges the existing narratives on the various aspects of the Kashmir history. It exposes many fallacies and dissects the works of historians that have perpetuated ahistorical perceptions over a long period of time. By linking history to the present, the book facilitates an understanding of the situation today. Along similar lines, his book Jhelum: The River Through My Backyard resorts to political symbolism by adding the Jhelum factor to the history of Kashmir. His two works in Urdu poetry and prose have won the highest State literary awards in 1984 and 2010.

In his latest book—that forms the focus of this piece—Kashmir, Looking Back in Time: Politics, Culture, History (published by Atlantic, 2021), Khalid Bashir produces a comprehensive analysis of the evolution of many political developments that shaped the socio-political and cultural landscape of J&K in the past decades or so. The book focuses largely on the interplay between internal factors such as political, economic, cultural, and religious, and historical forces that led to the emergence of various narratives and discourses. In methodological terms, Khalid has adopted the internal perspective to narrate the story with serious vigor and exploration while dividing the book into three sections—“Politics”, “Culture” and “History”, which are further subdivided into sixteen chapters. In all the chapters of the book, the author takes us on an intellectual tour of the socio-cultural and political history of the region and then narrates the story from the last century.

The first section is divided into four chapters where the author has recollected the ideas, connected the dots, and recast the past by visiting some lesser-known facts and things that have, nevertheless, considerably shaped the contested socio-political history of Kashmir during the times of the Dogras and, later, during the era of Sheikh Mohammad Abdullah. The book follows a new but rare path of dwelling on topics such as the personality of Sheikh Abdullah, the nature of the Dogra state, the Muslim Conference and its conversion into the National Conference by Abdullah, and its ill-effect on the political landscape of Kashmir. Later, this section also discusses the post ‘accession’ era of Sheikh, his journey towards becoming the Prime Minister, his dethronement from the chair in 1953, and his political romance with the Plebiscite Front for many years till he justified the Indra-Sheikh accord in 1975. Thus, this section brings to fore the detailed account of Abdullah’s dubious role in the politics of the state until his death in 1982.

The second section of the book informs the reader about the cultural richness of Kashmir and its people. Divided into seven chapters, this section narrates the tragic loss of culture and the reasons for its forfeiture to what author calls “robbing the valley of its rich heritage”. Here the author also recounts the advent of cinemas, everyday life experiences of common Kashmiris with film-watching, the changing of names of places in Kashmir with new forenames that forged new identities, and a few captivating tales of some important people of city Srinagar—with these containing aspects that are often missing or inadequately discussed in ‘mainstream’ histories. One can conceivably recognize the significance of this section further by reading two significant chapters: one, Of Prices and Fares and two, Romance with Rumours. The first one recounts the trade and prices of commodities in historical chronology while the second is a fascinating analysis of rumours that have been—and still continue to be—a source of political knowledge against the political elite in Kashmir. All these fragments of our past unveiled by Khalid’s book had till now not received any particular scholarly attention. It is here that the author meticulously captures the dynamics of the mood of the people living in the valley through tumultuous times over the last century.

Divided into five essays, the third section recounts Kashmir’s history where Khalid Bashir writes about the “oppressive Dogra rule” of more than a century, the birth of political awareness, and lastly the rise of a struggle for justice and emancipation. The most substantial contribution of this section is the concern of Sir Mohammad Iqbal vis-à-vis Kashmir. The author writes in detail about Iqbal’s role in the political awakening of Kashmiris, his anti-Dogra writings, speeches, and his love for Kashmir that made him an intellectual adversary of the Dogra regime. Based on numerous primary and secondary sources, Khalid Bashir debunks many false narratives that have been apportioned with Iqbal on Kashmir. The most thought-provoking is the lucid essay on Kashmiri Pandit community that discusses the causes and the prospect of the Pandit agitation of 1939—revisited by the author—and how the violent protests by the minority community in the Valley shaped the political climate of J&K. Similarly, in the subsequent chapters, i.e., 14th and 15th, the author expands upon insightful persuasive themes, such as how the Dogra government ruled the princely state by dint of its bureaucracy, the formation of many important but contested laws and rules, modes of transport, the construction of hotel in Gulmarg, and the different games that attracted many to Kashmir, ranging from polo to golf and cricket. The book ends with a crucial chapter on the history, evolution, role, and governmental control on journalism, particularly the print media in the Valley.

The superlative essence of the book can perhaps be best understood in an astute quote of Donald Rumsfeld, former US Secretary of Defence, “As we know, there are known knowns. There are things we know we know. We also know there are known unknowns. That is to say we know there are some things we do not know. But there are also unknown unknowns, the ones we don’t know we don’t know”. The author has been able to dissect the politics, culture, and history of Kashmir and the conflict in and over it by peering into the mist of socio-political history, weaving together a masterful chronicle and analysis in the process. Like his earlier writings, this book presents an insightful assessment of an author about the subject of his inquiry.

Perhaps what is most salient about the book is the way the author has engaged with critical political developments, making the reader more anxious to read further in order to learn more. As a student of Kashmir politics, I believe this account is the most incisive and insightful one to have been written on Kashmir in the recent past. Since Joseph Korbel, Alastair Lamb, and Christopher Snedden, who produced masterful scholarship on Kashmir, Khalid through a critical and masterly dissection of the Kashmiri’s past takes us into the future of Kashmir from a diluted notion of history and the historical development found in traditional writing. And it is here that Donald Rumsfeld’s quote becomes more relevant.

Even though the author has succeeded in writing a comprehensive volume, there are issues that need further deliberation and serious engagement from a variety of scholars. The chapters on the Plebiscite Front, Sir Mohammad Iqbal and his contribution towards J&K’s socio-political development, and most notably the Pandit question needs further probing and critical engagement. However, keeping all the limitations in mind, the book comes along with some unique and interesting knowledge. The author certainly offers a unique perspective for looking at Kashmir’s tumultuous past, while offering something more than a variety of writings on Kashmir’s history. More importantly, it advances a local standpoint, thereby making a departure from the overwhelmingly foreign treatment of Kashmir’s history found commonly in preceding and contemporary texts. The book, rich in content extracted from primary source material, is indispensable for scholars, researchers, and the political class attempting to study Kashmir from a new and refreshing point of view. 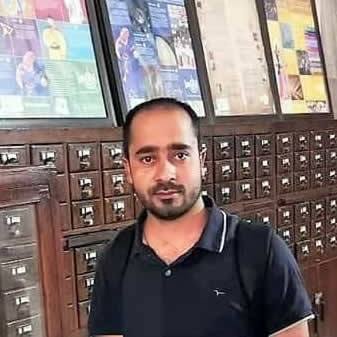 Javid Ahmad Ahanger
Javid Ahmad Ahanger holds a Doctorate in Political Science from Aligarh Muslim University, with a focus on the topic of “Political Opposition in Jammu and Kashmir: From Dominant Party to Multi-Party System.” His writings have previously been published in South Asian Journal, Cafe Dissensus Magazine, Greater Kashmir, Kashmir Reader, Kashmir Life, Rising Kashmir, Kashmir Images and Foreign Policy news among other reputed online and print magazines and journals. He has participated and presented research papers in more than one dozen international and national conferences and seminars in India.