Omair Bhat thinks of himself as a memory keeper. His poems have previously appeared in Critical Muslim, The Sunflower Collective, Celebration, Cafe Dissensus and Kashmir Lit. In his free time, Omair reads poetry from all over the world while researching international poets and their writings. He is currently finalizing a manuscript of his first book of poems.

Omair Bhat presents his poem “If It Were for Evenings to Search for the Lost Boys” that binds the present time with the past in a continuum of killing and disappearance that has exasperated even Kashmir’s evenings into screaming out the name of freedom. Featured earlier in our poetry special “Verses of Lament and Dissent – First Issue.”

END_OF_DOCUMENT_TOKEN_TO_BE_REPLACED 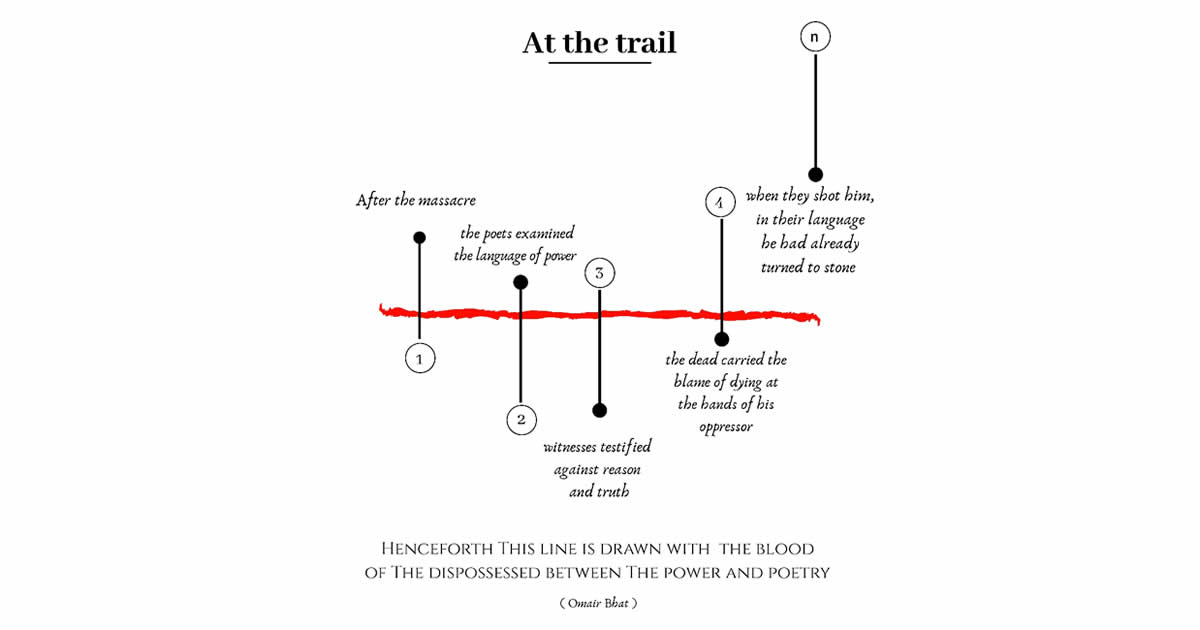 A Kashmiri Heart at Siege — A Personal Account by Omair Bhat

August of 2019 became a month of insomnia, despair and nightmare-ridden sleep for most Kashmiris, and particularly for those who were stranded away from home while Kashmir was put under a media, telecommunications, internet, broadcast news and public transport blockade unshy from being a complete lockdown and siege. Kashmiri poet and writer Omair Bhat presents his personal log of the first two weeks of such restless nights and tiresome days, when desperation competed with grief and anger to suffocate people like him in an endless uncertainty.

END_OF_DOCUMENT_TOKEN_TO_BE_REPLACED

Write — A Poem by Omair Bhat

A poem by Omair Bhat for the times, that is for all the times where war, love, separation, longing, struggle, death, life and resilience have marked human existence. A poem such that it flows from other such poems by the greats celebrated in verses that are alluded to herein, perhaps by compulsion or concealed despair camouflaging as hope, also as a tribute, for the tribulations of the past are carried in the tribulations of the present and the future.

END_OF_DOCUMENT_TOKEN_TO_BE_REPLACED

Growing tulips: A Poem by Omair Bhat (in dialogue with artwork by Suhail Naqshbandi)

In the contemporary Kashmir of the artist and the poet, a counter-aesthetic has been developed to resist against the glamorous and synthetically beautified portrayal of the land as an idyllic Bollywood destination for tourists. One of the precursors has been a series of works (“There is more to…[‘paradise’ than meets the eye]”) produced by artist, designer and political cartoonist Suhail H. Naqshbandi​. There are other examples to such artistic productions in circulation, with paintings and contemporary artworks depicting the rural environs and the cityscape being obstructed from their usual serenity by excrescent imagery of militaristic objects invading the frame from a particular angle or corner.

In the case of Omair Bhat​’s poem “Growing tulips…”, we find a “match made in heaven” when it comes to the evident dialogical manner in which the poem reads in perfect metaphorical and allusive harmony with Naqshbandi’s ‘image as response’ to the ‘touristification’ of Kashmir’s tulip garden. Needless to say, Naqshbandi’s series merits deeper critical commentary of its own. Meanwhile, Bhat’s poem reinvigorates through the power of the verse that counter-aesthetic employed by Naqshbandi in his image-making. The two works, the textual and the visual, complement each other ad infinitum et ultra or at least till a touristic aesthetic continues to be employed to cover up the traces of a structural violence that runs deep within the land, far away from the superficial glamour and paradisaical allure that Kashmir accumulates from the oblivious and willfully oblivious tourist and visitor.

As an added bonus, Bhat (re)innovates on the idea of the title of the poem as its first verse, requiring the suspension of certain editorial conventions and demanding more attention from readers, from the uneven cadence of the first line to the last. Naqshbandi’s work does something similar, running vertically and in opposition to the horizontally placed billboard ads that run freely throughout Kashmir’s roads and highways. For this reason, the poem and the image are displayed side by side in vertical opposition to the horizontally aligned landscape depictions that Kashmiris are all too familiar with, especially in ads. As both works show, in this particular case, their parallel vertical scale allows for a greater depth required for the process of excavation, whether that entails the retrieval of a greater meaning or the uncovering of an interred truth.

END_OF_DOCUMENT_TOKEN_TO_BE_REPLACED

Memory, a Poem by Omair Bhat

In this poem, Omair Bhat explores the elusive nature of memory, envisioning it as a thing of two, the one who fights to remember and the one who withers with time and forgetfulness. The poem is presented as a monologue in search of a dialogue with the one who is absent and fading. The struggle for remembrance is at the core of this poem as its verses poignantly elucidate.