Mir Yasir Mukhtar returns with an important photo essay detailing the struggle of a historic barbershop—the New Rose Beauty Salon—to stay afloat in Srinagar’s Tange-adda heritage market located in Dalgate. Established in 1953, the salon is run by two brothers, who inherited it from their father and have since strived to keep it functioning after four decades of operation—having already survived August 5 while barely making it across the still ongoing pandemic.

In Memoriam: One Day in the Life of Syed Ali Shah Geelani — A Photo Series by Sagar Kaul

Taken in the winter at the beginning of 2015, Sagar Kaul presents 47 photographs documenting the day-to-day life of a man older than the partition. In doing so, Kaul brings to fore a side of Syed Ali Shah Geelani that had not been presented through image before. These visuals serve as an indelible marker of the memory that his loved ones and close associates and friends preserve forevermore. These photographs are published herein “in memoriam” to provide solace to those many in Kashmir and elsewhere who mourn his departure during these trying and difficult times.

The Patronising Gaze of the Camera: The Problems with Constructing Visual Identity of Kashmiri Women Around Their Tears — by Sadaf Wani

Previously translated into Bangla and published in Bama Patrika, a Bangla magazine on gender, Sadaf Wani’s piece explores the problems with creating and reproducing visual portrayals of Kashmiri women around their tears and moments of emotional vulnerability. Focusing on the practices of using photographs of grieving Kashmiri women to accessorize articles and events based around Kashmir, the piece discusses the insidiousness of such acts and how centering the visual identity of Kashmiri women only around certain kinds of visual portrayals contributes to the erasure of complex struggles and contributions of Kashmiri women.

This piece includes screenshots (provided by its author) from various sources, displayed here under “fair use” for illustrative purposes, with direct a citation for each source. 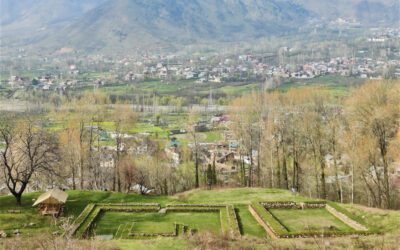 Manan Shah revisits a heritage site that holds the answers to a significant number of questions about the presence and development of Buddhism in Kashmir’s lengthy history. As a student of archaeology and ancient history, Shah offers a core introduction to a site of great importance that was excavated in 1923. Till date, the Buddhist Monastery at Harwan remains a marker of a Kashmiri history that places the Himalayan territory as an important historic location for the convergence of multiple cultures. In its exposition, Shah’s piece also shows Kashmir’s inherent cultural sophistication through a reading of Harwan as an archaeological and historical site that provides a view into Kashmir’s past far beyond the mediatized discourses and reductive narratives that attempt to represent Kashmir within a limited scope of relevance and importance—as a mere socio-political appendage whose place in South Asian and Central Asian history remains posited on shaky ground. Perhaps inadvertently, this essential piece provides an introductory glace into a history where Kashmir is a center and not some territory within the margins set by others—and in that, a place frequently referenced by multiple visitors seeking both knowledge and answers. The piece features the author’s photography of the site that was included in the World History Encyclopedia (republished here via CC-NC-SA).

Earlier this week, a photograph was circulated on social media platforms (like Twitter and Facebook) showing a Kashmiri man marching with a Palestinian flag through the streets of Srinagar. Those who posted the photo did not give its author her proper credit nor indicate the source of such a powerful image, resulting in yet another case of copyright infringement and outright creative theft.

Inverse Journal got in touch with Zainab, the photographer of this iconic scene. Here she presents the photograph along with her account of how such image-making came about in line with the tradition of visual storytelling that speaks more profoundly than words perhaps could—especially on a sad occasion such as Nakba Day (Dhikra an-Nakba). Zainab’s photograph carries even greater symbolic meaning when considering that she produced it while documenting—by pure chance—the remains of an Al-Quds Day (Youm-e Quds) march in Kashmir that is carried out on the last Friday of Ramadan to show support for Palestine and its people and to protest Zionism.

As such, Zainab’s photograph situates two major commemorative days (Dhikra an-Nakba and Youm-e Quds) in one frame as she captures the heartfelt scene on the streets of Srinagar (Kashmir) to reflect the great sense of solidarity that Kashmiris feel towards Palestine and its dispossessed people. As can be observed, the image is taken with a mobile camera, and is raw in all aspects, much like the sentiment of solidarity that is felt around the world and especially in a place like Kashmir that knows sorrow and loss all too deeply.

Along with the her note, Inverse Journal has included relevant links to Zainab’s broader work.

Inside the Friday Convention: Kashmiri Youngsters as Healers — by Mir Yasir Mukhtar

Mir Yasir Mukhtar presents a visual story about the age-old practice of leech therapy from his native Srinagar, with photographs taken at the onset of the current pandemic. Hirudinaria manillensis, or the Asian medicinal leech, secretes saliva and enzymes containing a wide variety of proteins that clear toxins from the human body, apart from serving as an anticoagulant, inhibitor, anti-inflammatory anesthetic and vasodilator. Hirudotherapy is more common than not in multiple parts of the world and has been classified as a medical device by the US FDA as of 2004. Mukhtar’s story revolves around an 18-year-old Hirudotherapist named Danish, who if called upon with the virally acclaimed cry, “Danishaa, kalle haa phot!” (translated “Danish, my head is exploding!”), gets to work by carrying out this centuries-old Kashmiri variant of the practice.

With a camera in hand, Adil Manzoor returns home to his Kashmir, and in returning, he also returns to a silence that is familiar yet strange. In these photographs, Adil tries to locate that silence in multiple ways, where photography as an “objective” visual medium traces in black and white the subjective and intersubjective matter of thought, distraction, meditation, loss and entrancement. The young photographer finds these situated in a silence that is peculiarly Kashmiri and that is drawn on Kashmiri landscapes and on the Kashmiri faces he captures in black and white.

Modern Family: The Transformation of the Family Photograph in Qajar Iran — by Staci Gem Scheiwiller

Staci Gem Scheiwiller explores the path of transformation that defines the Qajar family photograph, tracings its roots to Qajar painting and to the earliest examples of photography in Qajar Iran (circa 1839). Republished here from the Trans Asia Photography Review (Volume 9, Issue 1), via CC-BY-NC-ND-4.0.

Before the Lockdown — by Swasti Acharya

Swasti Acharya presents a series of photographs that she produced seven years ago, in June of 2013. The series “Before the Lockdown” retrieves, as photographs often do, what is set to be lost or displaced in one way or another (as memory or as something else). In such images, the eternity of a time past reverberates in visuals of everyday life, beyond the limits of enforced change and beyond a controlled liminality that has continuously besieged Kashmir, as if it were some sort of a “liminal space” made such for its own inhabitants (if one is to be reminded of the martial reality that exists beyond such innocent and unassuming visual framing). In more ways than one, Acharya’s visuals of Kashmir elucidate how photography is an art where “capturing” and “retrieving” can be harmonious and not disruptive as far as image-making is concerned, and that too through the unfamiliar lens of an unaccustomed outsider who goes back in time to recover visuals of something that tomorrow might not remain the same or might altogether have been forcefully transformed into something else. This series is published with a note by the young photographer along with relevant captions that go beyond any editorial framing and interpretations presented in this editorial introduction.

Srinagar in Colors and Shades — by Mir Yasir Mukhtar

In this series of photographs, Mir Yasir Mukhtar diverts his lens to portray everyday life in Kashmir beyond the horrors that are captured by professionals from his field of photojournalism. In habitual scenarios, it is almost impossible to avoid images of war, conflict, tragedy and violence. However, as the images themselves communicate, an alternate Kashmir, and with it an alternate Srinagar, exists to show how Kashmiris try to live on a daily basis while being at the focal point of the oldest unresolved geopolitical conflict of global modernity.

Although often overshadowed by the escapades of her more famous husband (said by some to be the real-life inspiration for Indiana Jones), the photographs taken by Yvette Borup Andrews on their first expeditions through Central Asia stand today as a compelling contribution to early visual anthropology. Lydia Pyne looks at the story and impact of this unique body of images.